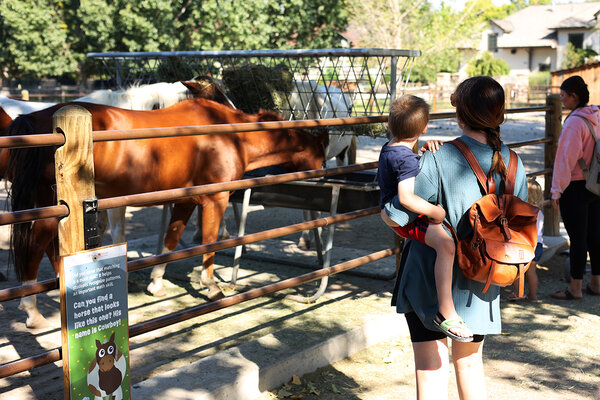 Salt Lake County (September 9, 2022) – The Utah STEM Action Center is launched the  “MILO & friends” campaign at Wheeler Historic Farm, operated by Salt Lake County Parks and Recreation. The goal is to help parents become more aware about the importance of teaching early math skills to their young children. Families who visit Wheeler Farm will see a series of signs that encourage them to do simple math activities with their 2- to 4-year old’s, such as comparing the sizes of chickens and turkeys, and identifying triangles and circles in nearby objects.

According to several studies, most parents lack the knowledge of the specific skills their children need to know before they go to kindergarten.

“If we can help parents become more aware of important early math concepts, such as shapes, patterns, matching, and other skills beyond counting, their children will be set up for success when they head to kindergarten,” said Clarence Ames, research and implementation manager at the Utah STEM Action Center. “We hope the signs at Wheeler Farm will show parents and caregivers that math is everywhere, and math is fun.”

Research shows that math scores for children entering kindergarten are the strongest predictor of later academic and career achievement. These math scores were stronger predictors than any other variable, including early reading scores, attention skills, socio-emotional behaviors (including rates of problem behaviors, social skills, etc.), socio-economic status, and gender.

The STEM Action Center partnered with Salt Lake County Parks and Recreation to launch “MILO & friends.” Guests of the farm will be able to fill out a survey to give feedback on their experience. If the campaign proves successful, the STEM Action Center plans to expand the program to more areas of the state.